A guide to researching the law of the EU

The Court of Justice interprets EU law to make sure it is applied in the same way in all EU countries, and settles legal disputes between national governments and EU institutions.

It can also, in certain circumstances, be used by individuals, companies or organisations to take action against an EU institution, if they feel it has somehow infringed their rights.

The Court is divided into 3 bodies﻿:

The Court of Justice is composed of 28 Judges and 11 Advocates General. The Advocates General assist the Court. They are responsible for presenting, with complete impartiality and independence, an ‘opinion' in the cases assigned to them.2

Case law of the Civil Service Tribunal is published in European court reports. Reports of European Community Staff Cases (ECR-SC). This publication can also be found in the European Documentation Centre from 1994 -2005 (incomplete) - Shelf mark: EDC-ts.

Several journals pay attention to the case law of the European Union, for example:

The case law since 17/06/1997 is accessible in all EU official languages via the court's website. Its database includes the full text of judgments, opinions of the Court, Advocate General's opinions and orders of the EU courts. Furthermore, the database contains summaries of decisions, information on decisions which have not been published in the court reports and notices in the Official Journal of the European Union.

You can search the database by case number, date, name of the parties, reference words in the text, etc.1

Below you see the homepage with a quick search form.

On the left side is a menu. Here you find:

button if you want to perform an advanced search. 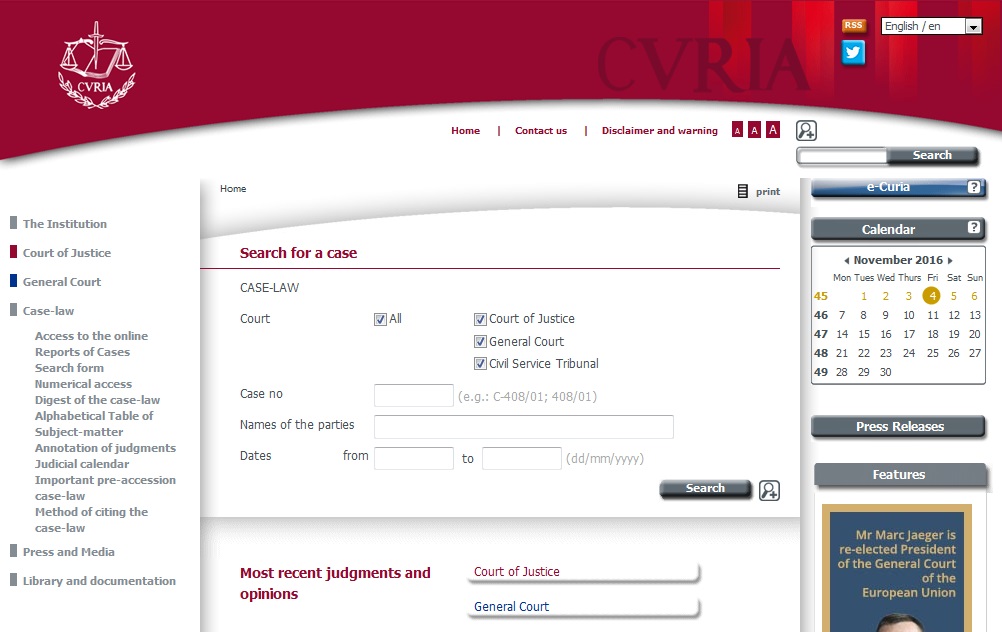 In t﻿he List of results you can use the

b﻿utton to find case information like citations of case-law or legislation﻿, dates, references - for instance notes on academic writings﻿- and procedural analysis information.

EUR-Lex is the legal database of the European Union. It provides amongst others free access to EU case-law (judgements, orders, etc.).

Below you see the webpage in EUR-Lex where you can find and consult case law from the EU Court of Justice.

Use the Directory of European Union case law﻿ to browse systematically through the collection of judgments and orders of the Court of Justice, General Court and Civil Service Tribunal. 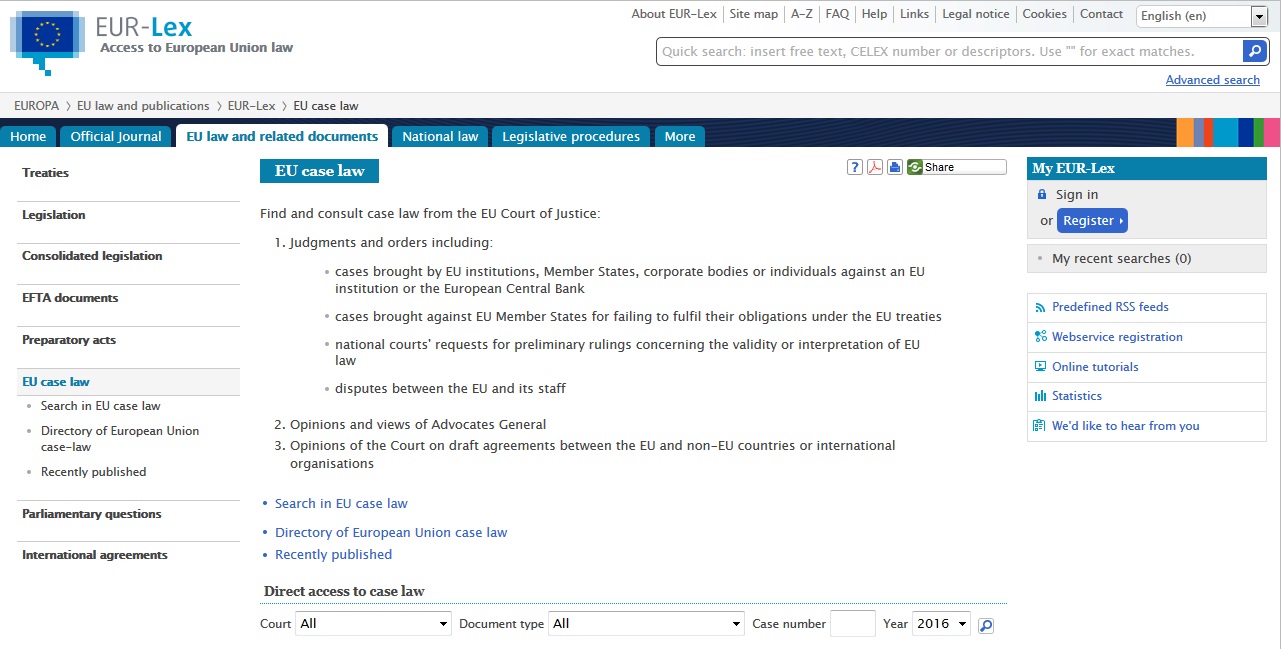 Tip
Once you've found the document or legislative procedure you wish to consult, you can use the Document information tab to find notes relating to the decision.

JURE, a database created by the European Commission, contains case law on jurisdiction in civil and commercial matters and on the recognition and enforcement of judgments in a State other than the one where the judgment was passed﻿.

The JURE collection contains relevant judgments delivered by courts in contracting states (EU Member States and if applicable Iceland, Norway and Switzerland) and the EU Court of Justice under the following:

The judgments are available in their original language only.

There is also a summary of each judgment in English, French and German (and in the original language, if the country in question provides one).

Below you see the JURE search form (in EUR-Lex) with multiple criteria to limit your search. 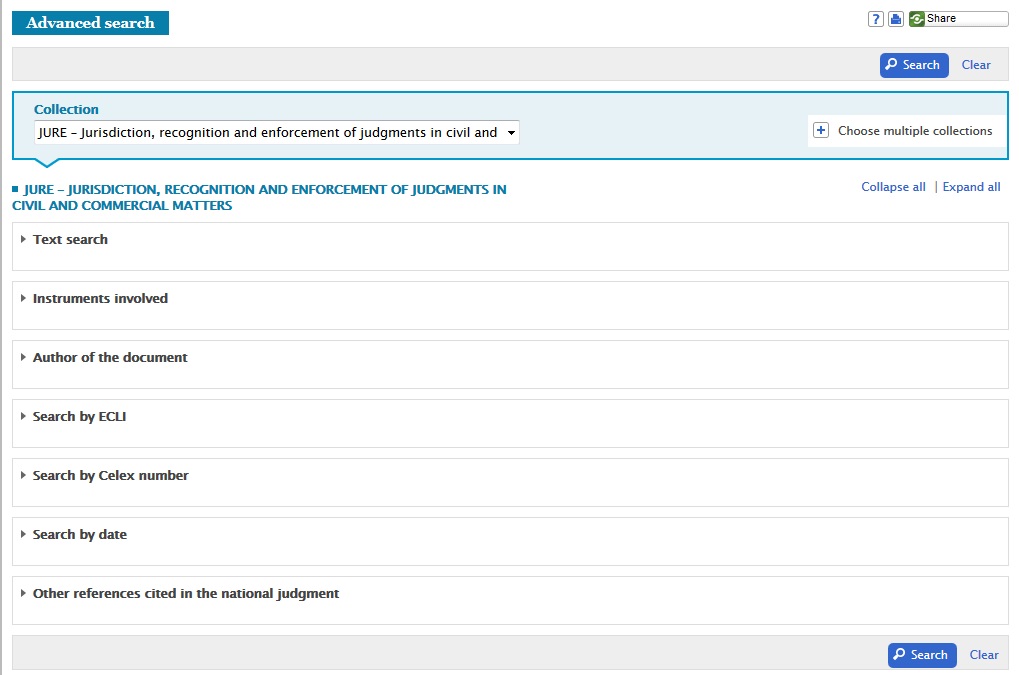 Below you see the homepage with a search form on the right sight. 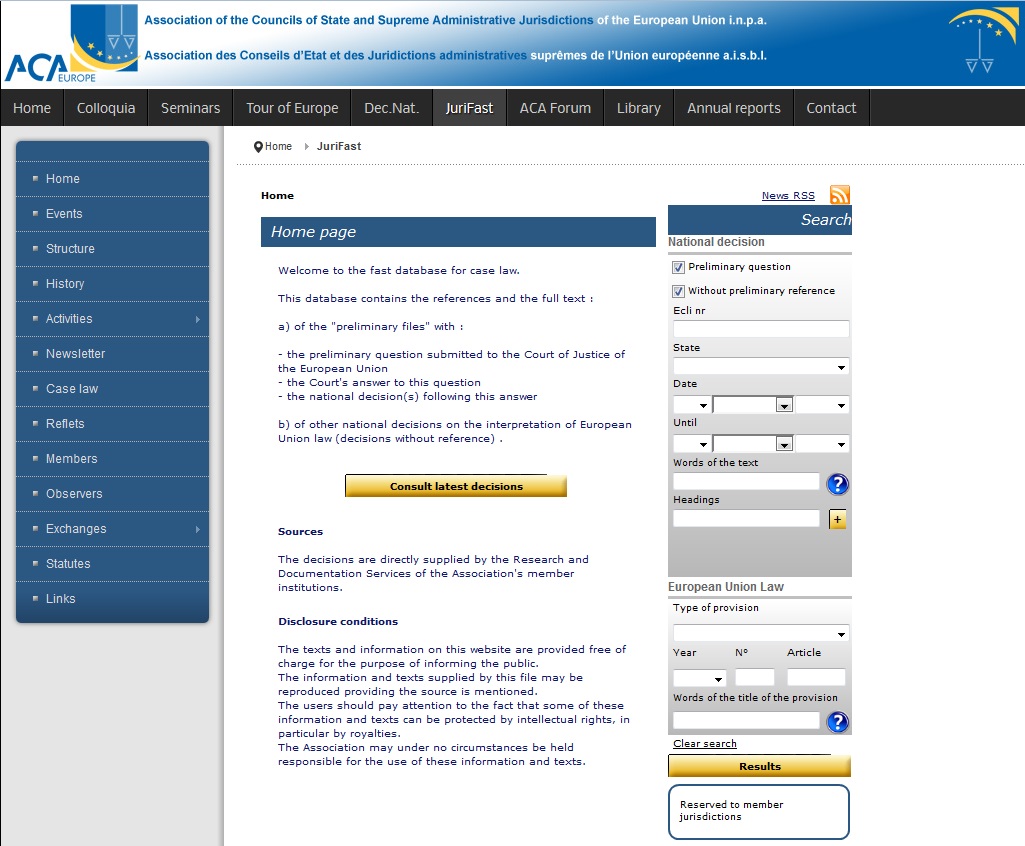 For each decision, the database contains:

In the case of preliminary questions, additional information is added in due course, namely: